[Individual articles from the Fall 2018 issue of Intersections will be posted on this blog each week. The full issue can be found on MCC’s website.]

In the 1980s, millions in the Global North were exposed to shocking images of famine in East Africa. It was certainly not the first time that such stark, desperate portrayals of hunger and poverty had been widely published, but it marked a new level in the proliferation of a certain type of imagery adopted in the service of fundraising appeals. The images showed widespread death and devastation. Subjects were usually visibly
malnourished, sick and depicted as passive and alone. In the years that followed, these fundraising tactics received deep criticism: for their oversimplification and decontextualization; for their attempt to appeal to charity rather than rights and justice; for the unequal relationship they suggested between the receiving victim and the heroic Western giver. 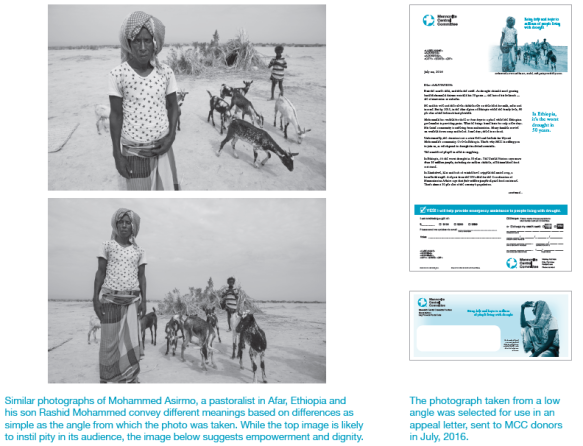 But these efforts had worked, countered the defenders of these images, arguing that many thousands of lives had been saved through the ensuing humanitarian response.

In the years that followed the famine of the mid-1980s, many relief and development organizations moved away from this sort of negative, one-dimensional portrayal of those who participate in and benefit from their humanitarian efforts, often adopting codes of conduct to guide their communications efforts. Most organizations have begun to employ more positive imagery, attempting to portray dignity and agency in those pictured. Yet the question persists: by avoiding images that show devastation and provoke pity, have organizations raised less money for their work?  If a fundraiser’s primary concern is maximizing an organization’s ability to respond to crisis, is the loss of humanitarian capacity worth the less tangible virtue of using more positive imagery?

Responding to this line of questioning requires taking a step back and asking whether such a trade-off has in fact occurred. Do donors respond more to a particular type of appeal? Thanks to a young and rapidly developing field of social science research, we can explore these questions with more precision, studying why people choose to give and what factors accelerate or mitigate the impulse. By better understanding donor behaviour, we may find a model for effective fundraising communication that prioritizes positive and dignified representations—and we can also turn our attention to what happens after a decision to donate is made.

Fundraising appeals attempt to trigger particular cognitive or emotional responses in their audience. In recent years, the study of “helping behaviour” has led to some agreement among researchers that empathy— which is predictive of charitable giving—is composed of both affective (emotional) and cognitive dimensions. Giving decisions tend to be driven by either one or the other, but affective giving decisions comprise the bulk of responses to a typical charity appeal.

It might be tempting to pretend that these emotional processes do not matter, and to suppose that donors should simply give based on a reasoned determination of doing what’s right. It may also be tempting to suppose that a particular organization’s audience is special and somehow immune to these affective processes. But this would not accurately reflect the social and cognitive landscapes in which organizations like MCC work, contexts in which affective processes influence the majority of donations.

Deborah Small has cited several studies that demonstrate how people respond more generously to those with whom they feel affinity. One factor that contributes to “felt closeness”—similarity—is dependent upon social and cultural conditioning through “in-grouping.” Studies grouping people into an “in” group and an “out” group found more generous feelings among subjects toward in-group members. Surprisingly, this tendency held even when these groupings were completely arbitrary. The “categorization of others as belonging to the same social group as oneself”—no matter how spurious the in-grouping—“arouses feelings of greater closeness and responsibility, and augments emotional response to their distress.”

This social science research finds that individuals engage in different levels of processing and decision-making depending on the perceived similarity of a “victim.” Out-group members are likely to be processed more abstractly, with less emotional response (see Kogut and Ritov). These “cold cognitions” are less likely to motivate people to give than emotions, which create a “mental spotlight,” initiating an internal process that calls for immediate action.

Feelings of similarity or dissimilarity contribute to other cascading effects on a potential giving decision. When an individual perceives those affected by a disaster as dissimilar rather than similar, the impulse to help is interrupted in at least three distinct ways. First, feelings of dissimilarity can affect perceptions of how severe a situation is. Second, those feelings influence perception of the adequacy of whatever response is already in place. And finally, feelings of dissimilarity increase the likelihood of viewing those affected by a negative situation as responsible for their own suffering.

When an audience believes the subjects described in a fundraising appeal are at least partly responsible for their own situation, not only are the effects of empathy reduced, but a different set of emotions is also triggered: victims perceived to share responsibility for their situation tend to generate negative affective reactions, which further dampen altruistic impulses.

While humanitarian organizations may launch crisis appeals as isolated events, concerning themselves with maximizing revenue on each individual appeal, their messages have always been received within particular social and psychological contexts. Before a viewer has the chance to react to the specific visual choices made by an organization in its fundraising appeals, these contextual and emotional factors are already at play, biasing the viewer either toward or away from a donation decision.

These social forces present interesting prospects for the creative communicator. Through their communications efforts both during and prior to an appeal, organizations have opportunities to encourage feelings of similarity, reduce social distance, use social information to encourage positive behaviour and counteract prejudice—positive outcomes on their own which also increase the likelihood of donor response.

The various determinants of giving behaviour, such as the dimensions of social distance identified by Deborah Small, are closer to spectrums than they are dichotomies. There is room to nudge an audience in a desirable direction. For example, studies have found that proactive in-grouping through an appeal can positively impact giving behaviour. In other words, fundraising that frames recipients as similar and proximate rather than as helpless, distant and “other” may in fact prove more effective.

It would be misleading to deny the effectiveness of pity-based appeals. They are proven to work. They are not the only fundraising strategies that work, but they may be the easiest fundraising strategies that work. David Hudson and Jennifer vanHeerde-Hudson measured the impacts of various emotional pathways triggered by fundraising appeals and found pity-based appeals to be effective at increasing giving decisions by provoking both anger and guilt. The emotion of “hope” was a similarly strong predictor of giving behaviour but was much more difficult to trigger than pity. However, when they extended their analysis to look at the impact on their audience after an appeal, a different picture emerged. After measuring the links between different emotional responses and their impact on decisions to give, Hudson and vanHeerde-Hudson also measured potential long-term effects on givers. They found a clear pattern where those who felt pity were likely to make an immediate giving decision, but also expressed reduced confidence in their gifts making a difference and a reduced sense of hope for the future. In other words, they gave to ameliorate an uncomfortable, temporary feeling, but in the process, they became less likely to give in the future. Humanitarian organizations interested in cultivating a strong, sustainable donor base should be concerned not just with immediate results, but with the long-term effects of their fundraising efforts.

No serious humanitarian organization should allow itself to define its communications objectives solely in terms of a dollar amount. A fundraiser’s first concern may be the bottom line, but the real impacts of their public communications extend beyond an organization’s revenue sheet. An organization’s decisions about how to portray its work carry real-world implications not only for itself, but for both potential donors and the beneficiaries of its work. The ethical weight of these decisions should never be forgotten.

Raising funds by telling other people’s stories is a complex endeavor, but for the organization willing to question its habits and learn from research, there should be a clear conclusion: successful fundraising and dignified portrayals of beneficiaries do not need to be mutually exclusive—and they may go better hand-in-hand.

Banfield, Jillian C. and John F. Dovidio. “The Role of Empathy in Responding to Natural
Disasters.” Analyses of Social Issues and Public Policy (2012):276–279.

Oppenheimer, Daniel M. and Christopher Y. Olivola. The Science of Giving: Experimental
Approaches to the Study of Charity. Psychology Press, 2011.